Hi, my name is Cindy and I’m a Yarnaholic.  I wasn’t always an addict.  There was a time when I could walk into a local craft store and purchase just a skein or two of acrylic and be on my way.  Then a so-called ‘friend’ of mine told me about some wicked Merino that could be found at the local yarn shop around the corner and I was hooked.


At first I could control my purchases… just buy a skein here and there to add to my stash.  But then I visited a shop that was going out of business, everything was 50% off and my addiction kicked in full throttle.  I think I lost consciousness for a bit and when I came too and emerged from the shop I couldn’t even bear to look at the receipt and the damage I had done to my credit card.  Yes, it was shameful but did it stop me?  No.  Somehow I was able to justify the purchase... “It was just this once” and “It’ll never happen again.”  But it did happen again!  Within a few weeks I was scoping out other yarn shops and I was no longer satisfied with simple wool.  I moved on to wonderful blends of alpaca, silk and cashmere.  My baskets at home were overflowing and I had to purchase shelves and storage bins to accommodate my bounty.


Then one day another ‘friend’ pointed out to me that I needed to buy enough yarn at one time to complete a PATTERN.  What a great concept!  But now, not only did I need to purchase more yarn, I also needed to have a multitude of patterns that would accommodate any quantity of yarn that found its way into my life.  If yarn is like crack, then patterns are heroin.  I started out slowly by going to libraries and buying back issues of magazines.  This quickly lead to my setting up a knitting book search on Paperback Book Swap and purchasing actual magazine subscriptions.  Before I knew it I was becoming too impatient to wait for books on PBS and started ordering them directly from Amazon.  They quickly started piling up… more shelves and more storage were needed.  To date, counting the book I got in the mail yesterday, my library includes 94 books, 45 magazines and 77 single patterns for a total of 3,183 patterns (I am forever indebted to Ravelry for helping me keep track!!!).


It’s comforting to know that there are others out there like me, we go to meetings on Wednesdays and Saturdays, we talk about our addictions and where we got our last ‘fix.’  We pass around luscious skeins of yarn and covet each other’s stash.  If a rehab exists we will avoid it at all cost and will happily live out our days like the yarn junkies we are. 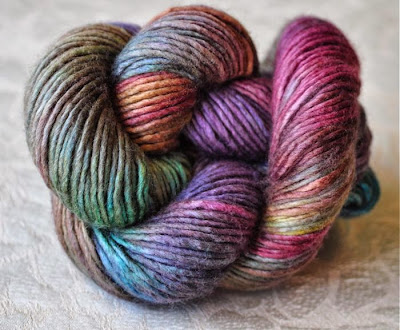 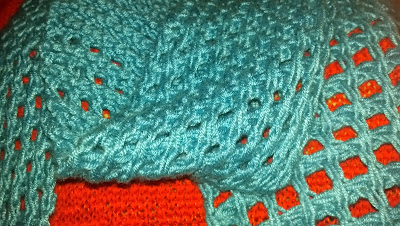 Just finished my first project AND learned a new skill!   While it was as easy as I had expected, I did have to refer to one book and one YouTube video to get me through it.  The pattern I used was Tara’s Tunisian Scarf with Sirdar Snuggly Baby Bamboo DK yarn in turquoise.  OK, it doesn’t look EXACTLY like the picture, but close enough.  After all, I'm not a perfectionist and 'Close Enough' is one of my mantras...  it makes life so much easier!  One side of the scarf is much stretchier than the other which gives a somewhat diagonal look (I actually kind of like that) and the reverse side is every bit as nice as the front - bonus!  All in all, I’m very happy with the results.

So here’s my take on Tunisian Crochet…

1    1)  It’s super easy, especially if you already know how to crochet, although it’s a bit more complicated (but not much).

2)   It’s a bit monotonous… you crochet stitches onto the hook, you crochet them off of the hook.  Kind of like wax on, wax off for Karate Kid fans.  But does the monotony come from the Tunisian Crochet technique itself or because it was a scarf and scarves are typically boring?  This may require more investigation.
3)  It’s super quick!  Once I got the hang of it I flew through the project.  And the best part is that if you screwed up, you just had to rip it out to the beginning of the 'wax on' row where you only had one stitch on the hook and take it from there.


4)  I love the look and the weight, heavier than knitting and more dense than typical crochet.  I blocked it last night (well as much as you can block bamboo) and added some beaded fringe to jazz it up a bit and really love the results.

My conclusion?  I need to break out the Tunisian Crochet book I bought and try a pattern that’s more challenging. There's an afghan in there with several different stitches and a sweater that I absolutely adore.   Someone at our knitting group last week said that she had great results doing Tunisian Crochet Entrelac, but I’m not sure I’m ready to try that.  Mostly because I don’t want to spoil the fun of the knitting Entrelac class that I’m taking at the end of the month.  I know that makes absolutely no sense since they are two different techniques, but somehow it would feel like cheating.

So now what?  Well, I have a trip to Boston in a couple of days and trying to navigate a new subway system seems like enough of a challenge so I'll be 'chasing butterflies' for awhile...  Maybe just grab one of the hundreds of projects I have in my stash to take along.  (Of course if my husband is reading this the number would be much lower.) Needless to say, I've already mapped out a couple of local yarn shops to visit in Boston where I intend to make purchase of my typical yarn souvenir.  At first I thought I would just peruse the aisles, petting the yarn and purchasing whatever spoke to me in the softest, dreamiest 'voice.'  Then it came to me...  I need to get some red fingering yarn.  Yep, I'm going to knit a pair of Boston Red Sox!  :-) 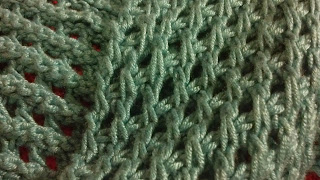 Photos are taken with and without flash.  The flash shows off the color better but I think the stitches are more distinct without it. 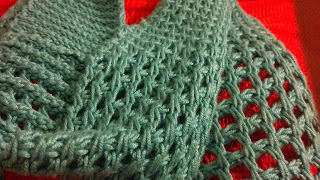 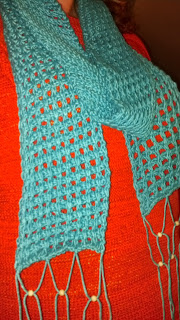 Posted by Yharma at 4:35 PM No comments:


Given my focusing disability I decided that I need to start a list of exactly what I plan to work on in the coming year because if I don’t I will continue to chase butterflies (which is a euphemism for mindlessly knitting one pattern after another).  So here goes…

1   1)      Tunisian Crochet – I have the yarn and pattern so I am hooked up and ready to go!!!  I also have a book to help me through the hard stuff but I don’t expect there will be much of that.  I know, famous last words.

2   2)      Entrelac – I’m signed up for a class at the end of October with Amy…  can’t wait!  I took a class before and was impressed with my ability to learn to knit backward since attempts at backwards stuff has always proven to be somewhat detrimental for me (roller skating springs to mind).  My daughter was able to march backward in formation while playing the saxophone in the marching band and I was absolutely fascinated by that.  I bet she’d make a great Entrelac knitter.  Except she doesn’t knit.

3   3)      Colorwork – Stranded/Fair Isle, Intarsia, Brioche…  LOTS to learn here!  From my brief (I’m talking no more than 10 minutes) attempt at Fair Isle I’m pretty sure this is going to require a class, maybe some one-on-one instruction and possibly therapy.  I’ll see what Pittsburgh Knit & Crochet festival has to offer, I’m sure someone there can get me through it…  well, maybe not the therapy but that’s not really yarn related anyway.

4   4)      Dying yarn with natural ingredients – I bought some undyed yarn and an Indigo plant at the Great Lakes Fiber Festival in the spring.  The plant is doing great but it’s still very green, isn’t some part of it supposed to turn blue at some point?  There was an article in a spring magazine that gave instructions on how to dye yarn in big jars of water set in the sun, kind of like sun tea.  That was my purpose for buying the plant and yarn, but it’s October now, not much sun so I guess this one will have to hold off until spring or summer as long as the plant doesn't die.  That’ll buy me some time to figure out the whole green to blue dilemma.

5   5)      Spinning – I bought a drop spindle last year and received a spinning book as a gift AND I have roving.  Originally my husband Jerry thought he’d like to learn how to spin yarn but that was very short lived.  One of our members was spinning at SnB last Saturday.  She made it look really easy.  I’m pretty sure it’s not.

7   7)      Design a cable pattern – See ‘Knitting Math’ above…  with the added bonus of graph paper and cable needles!  Can my Scottish heritage be revoked if I screw this one up?

8   8)      Double Knitting  - Another technique for which I’ve already taken a class but you know us old dogs, if you don’t use it you lose it!  (I actually lost it a long time ago)  This technique brings to mind a guy I dated in the 70s that always wore stretchy polyester pants, whom I sometimes now refer to  as the ‘Double-knit Wit.’  I know, that’s not nice and it has nothing to do with knitting, but when you’re an old dog you tend to not care.
Wow, isn’t that a great list?!   I can feel myself getting better and smarter by the minute! :-)
Posted by Yharma at 5:55 PM No comments:

A Little Bit About Me

Yharma
Cuyahoga Falls, OH, United States
My love and passion for fiber, color and creativity has led me down this path of wonderment. This industry includes some of the most remarkably talented people who contribute to its ever-changing evolution. Fiber work is truly an art and I promote it as such. Whether it’s creating incredible colors in a dyeing studio, designing the next fashion statement or performing magic with needles and hooks to create a unique masterpiece, there’s always something to learn and be inspired by. It’s ever changing and always exciting!